Get ready because this is a giant flavor bomb in your mouth. Crusty toasted bread, arugula, salami, soppressata, mozzarella cheese, green olives, sun-dried tomatoes, red onion and spicy jalapeños all get tossed together in a sweet honey dressing loaded with everything bagel seasoning.

Happy Frydae, friends! Today, I’m sharing something to help you to escape your winter blues. This salad is a flavor bomb waiting to explode. It’s sweet, salty, acidic, crunchy and just downright delicious! This isn’t your typical green salad either. In fact, it’s my take on a panzanella — a Tuscan chopped salad traditionally made with tomatoes, herbs and stale bread that gets dressed in oil and vinegar.

Yes, that’s right, a salad exists that’s light on greens and heavy on the bread. So, if you’re trying to avoid carbs…this “salad” is probably not for you. But if you’re a bread lover like me, this salad is right up your alley.

The ingredients in this salad are inspired by a pizza I recently had that is now my absolute favorite pizza topping combination. The pizza starts with melty mozzarella cheese, salami, red onion, jalapeño peppers and Castelvetrano olives piled on top of red sauce and pizza dough. Sounds a little out-there but overall nothing too crazy right? Well before it’s baked, the edge of the crust gets a heavy dose of everything bagel seasoning pressed into it and then the real kicker comes at the end when the whole pizza gets drizzled with sweet sweet honey. Ugh. Guys, it’s literally Heaven on a pizza…or the pizza that I hope is served in Heaven. What I’m trying to say is, it’s delicious.

Anyway, after eating that pizza and falling in love with the flavors, I wanted to create something else that used this amazing combination because, quite honestly, I just can’t get enough. I arrived at a panzanella salad because it seemed like a natural fit since the rest of the ingredients are essentially an antipasto platter. As I’m writing this, I’m also thinking this could also work wonderfully as a pasta salad too. Just swap the bread for rotini or penne pasta and it’d become a fantastic make-ahead potluck pasta salad. I’ll have to try it out and report back later.

Now, to make this panzanella is super easy. Start with the dressing so that the flavors can marinate together while you chop and prepare the rest of the ingredients. To begin, add all of your dressing ingredients to a food processor and blend until smooth. I like to reserve half of the everything bagel seasoning until after the dressing is pureed so it has some whole sesame seeds running throughout it.

Then, toast the bread cubes in a skillet over medium heat until they start to turn golden. You want the bread cubes to be dry enough to have some crunch but still have a slightly soft, bready interior. Think half-baked croutons.

Once the bread is toasted, it’s really just a chopping fest from here. Slice, dice and chop your salami, soppressata, mozzarella, olives, red onion, sun-dried tomatoes, basil and jalapenos and add them to a big salad bowl with the bread cubes and some peppery arugula. Then, drizzle with the dressing and toss to coat.

I think this salad is best served immediately when the dressing is just starting to soak into the bread. But, I know some people love panzanella the next day too once everything has marinaded together and the flavors have fully developed. If you want to do this as a next-day salad, I would probably leave out the arugula so it doesn’t get wilted and add it just before serving.

However you choose to enjoy this salad, just be prepared for lots of flavor. Feel free to change up the ingredients too. Swap in some pepperoncini peppers, burrata, fontina cheese or roasted red peppers. Those would all go great in this “salad” too.

If you make this panzanella, please give the recipe a rating and tag me on Instagram (@frydaeblog or #frydaeblog). You can also leave me a comment below too—I’d love to hear your thoughts. Have a great weekend everyone! 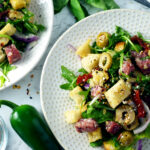 Get ready because this is a giant flavor bomb in your mouth. Crusty toasted bread, arugula, salami, soppressata, mozzarella cheese, green olives, sun-dried tomatoes, red onion and spicy jalapeños all get tossed together in a sweet honey dressing loaded with everything bagel seasoning.
Prep Time25 minutes
CourseSalad
CuisineItalian
Servings: 8

If you want to make this salad ahead, go ahead and mix the all salad ingredients together reserving the bread cubes and arugula out separate until just before serving. Then, when you’re ready to serve, toss the bread, arugula, and salad ingredients together and then add the dressing. This will ensure your greens and bread remain crisp until you’re ready to dig in.
arugulabasileverything bagel seasoninghoneyjalapenosmozzarella cheeseolivespanzanellared onionsaladsalamisoppressata
0 comment
0
FacebookTwitterPinterestEmail
previous post

Who misses summer already? Cling to the final rays

Fun fact: adding a flaky layer of pie crust and a

Made one of my very favorite meals tonight for fal

Just in time for Cinco de Mayo! Sharing these extr

I feel like we could all use a little extra warmth

How is everyone doing? What are you planning to do

I hope everyone is staying in and staying safe whe

Change things up this St. Patrick's Day with these