Perfect for holidays, parties and large gatherings, this simple, 3-ingredient ham is made right in your slow cooker. Unlike traditional ham that’s sliced thin, this ham cooks in root beer and brown sugar until tender and then shredded like pulled pork.

Today, I’m sharing one of my all-time favorite entertaining recipes. I make this root beer slow cooker ham every year for Christmas and Easter. It’s the perfect recipe for a crowd because it’s simple, hands-off and makes a ton of food.

This ham was inspired by one of my local favorite Milwaukee brunch spots, Blue’s Egg. Their ham is unlike anything I’ve ever eaten before because it’s shredded like pulled pork. It’s so tender and juicy and is the shining star on their egg’s benedict. It wasn’t long after my first visit, that I made it my mission to create my own pulled ham recipe.

Several years and many versions later, this is the recipe that stuck. Not only is it delicious, but it’s simple too. You start with an 8-10lb bone-in ham. I personally prefer the butt portion, but the shank portion also works great.

Then, you just need about 1/4 cup of brown sugar and a 2-liter bottle of your favorite root beer. The root beer and brown sugar add a nice sweetness to this ham that’s almost maple-like. To cook, add everything to a large slow cooker and cover. Then, let it hang out for 6-8 hours on high or 8-10 hours on low.

If your ham doesn’t fit in your slow cooker, you can cut it into a few chunks and let it cook in 2-3 larger pieces. The key is making sure your lid can securely fit to keep the moisture inside the slow cooker. You don’t want your ham baby drying out!

At about the 4-hour mark, I like to turn the ham. Depending on the size of your slow cooker, the whole ham likely won’t be able to be submerged. Turning it halfway through cooking ensures every inch of the ham has the opportunity to cook in the root beer.

After 8 hours, the ham should be falling apart. Remove the meat from the slow cooker and shred it using two forks. From here, you can either return the ham to the root beer and keep it warm until serving or you can pile it high onto a platter.

I often make this ham a day ahead. One thing I like to do, once the ham is cooked, is to store the shredded ham separate from cooking liquid overnight in the fridge. Then, in the morning, I can easily skim and remove some of the excess fat solids from the cooking liquid. I don’t know how much this truly helps from a health standpoint, but it makes me feel less guilty about eating three pounds of this ham! After skimming the fat, I put the chilled ham and skimmed cooking liquid back into the slow cooker and let it warm back up on my slow cooker’s lowest setting.

The best part about this ham is the leftovers! I make this recipe periodically for just my husband and I. We eat it for dinner and then freeze smaller portions of it to use later. We use it to make toasted ham sandwiches, add it to omelets, make split pea and ham soup, and put it on top of our eggs benedict. The possibilities are endless.

This ham is always a hit at the holidays and parties. People always ask for the recipe and are always surprised to hear how simple this flavorful ham is. So, if you’re looking for a no-fuss recipe to serve this Easter, try out this slow cooker root beer ham.

If you try out this recipe, don’t forget to give it a rating and leave me a comment below. You can also tag me on social media. It’s @frydaeblog or #frydae absolutely everywhere. I’d love to see this on your family’s Easter dinner table! As always, thank you so much for visiting and I hope you have a wonderful weekend! Happy Frydae! 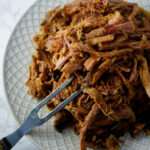 Tip: If you want to make this ham a day ahead, cook and shred as directed above. Then, store the shredded ham separate from the cooking liquid overnight in the refrigerator. The next day, before reheating, skim the top layer of fat solids from the chilled cooking liquid and discard. Then, recombine the shredded ham and cooking liquid in a slow cooker. Warm on low or your slow cooker’s “keep warm” setting.
christmaseasterhamholidaypulled hamroot beerslow cooker
4 comments
1
FacebookTwitterPinterestEmail
previous post

Every Christmas I’d fill half my plate with Alan’s traditional ham, and half with your root beer ham. Christmas is about tradition, but also about fun, and a Habermehl Christmas meal is all about ham.

I was hoping you’d see this recipe, Uncle Jim!! You are right, Habermehl Christmas is definitely all about HAM!

so simple and very good tks

Thanks so much for the comment, Marion. So glad you enjoyed 🙂

This error message is only visible to WordPress admins